Currently a ongoing anime series by A-1 Pictures .Student council president Miyuki Shirogane and vice-president Kaguya Shinomiya appear to be the perfect couple. Kaguya is the daughter of a wealthy conglomerate family, and Miyuki is the top student at the school and well-known across the prefecture. Although they like each other, they are too proud to confess their love as they believe whoever does so first would lose. The story follows their many schemes to make the other one confess. 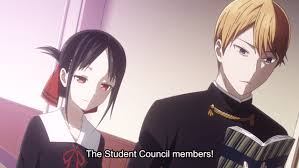 Kaguya is a intelligent , beautiful and always trying to stay one step ahead of every situation .

Miyuki  is the top student of the school and the president of the Student Council . Always super serious and hard working and trying to figure out ways to respond to the plans of Kaguya who always comes up with these over the top plans to get him to ask her out .

Both characters straight man act are played so much it reminds me every Feminist v Men’s Right Advocate argument online .

In a sense both these characters are so obsessed with each other but never willing to admit they love each other so much but don’t concede defeat .

Same way it goes with these groups online . These fights feel almost like a wrestling style of dramatics but so in obsessed with others movements .

But what makes this show really come to life is the secondary characters Chika the student council secretary a upbeat slightly ditzy with a dark sense of adventure . She brings chaos for main cast. and The Treasurer Yu is a slightly paranoid genius with numbers and a slight romantic .

Making this show one of the best secret gems of the season . Each episode is so good just like with these online fights you just want both sides to admit they want to fuck and get things over with.