Sword Art Online was a massive hit . Making fans of both guys and girls . But as the genre of Main character getting stuck in a MMO gets more popular a lot of people tend to forget the original series that started it all off. Today we shall compare 2 shows to see which one did it better.

Kirito is a hikimori obsessed with games. One day he purchases the latest immersive MMO . When the users logged in a grand announcement was made they will not be able to log off as they now trapped inside the game and if you die here you will die in Real Life. 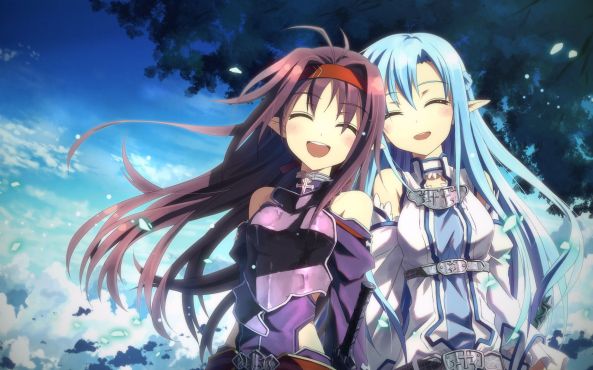 Very Modern Anime using a lot of action scenes to keep viewers excited throughout the show. 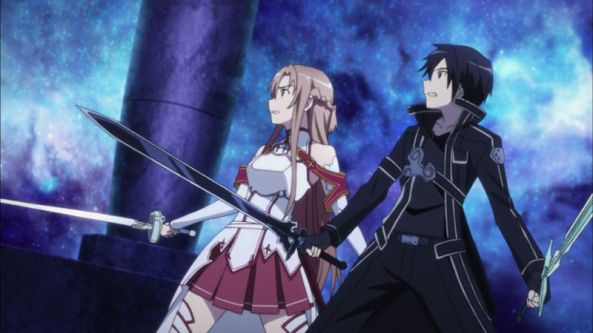 While it keeps you watching up until episode 14 in the first season afterwards it jumps the shark . I can’t say without ruining it the sudden change takes a very creepy turn involving his sister and a villain that likes sniffing hair.

Composed by the great Yuki Kajiura who has worked on countless anime, video games and films does a fantastic job of captivating its audience and because of this helped it become one of the new powerhouse shows at the time.

Kirito was a Hikimori then he wasn’t in the game. He was recluse until he wasn’t and throughout the whole series every girl wants to jump on his bone.

Good Action Series with some comedy but without a few things that make it special it wouldn’t become that big of a hit. 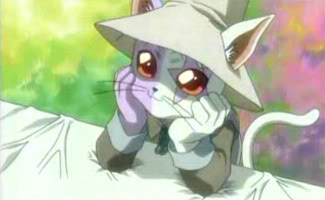 Set in a futuristic 2005 Tsukasa a young boy who gets trapped within the MMO called the World. He doesn’t mention a lot of his irl life and people are suspicious of a user who never logs out and has massive destructive power.

Using a lot of water coloring gives this series a surreal look that one forgets that they are in a game. They also use a lot symbolic imagery for dream sequences which really adds to the mystery of the show. 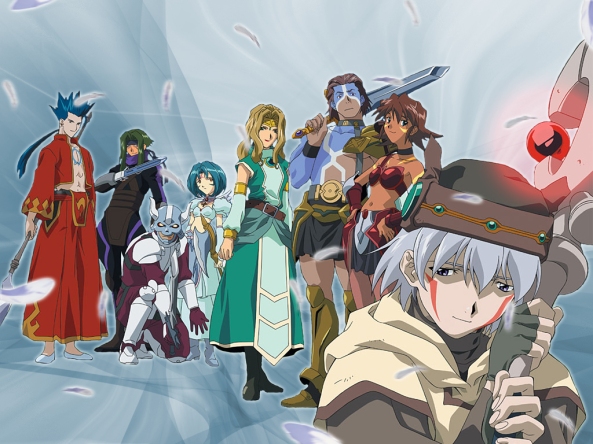 Composed by the great Yuki Kajiura once again is there anything that she can’t do giving this series a fantastic and eerie soundtrack.

What makes this series unique is the reasons people give for why they joined the World . Whether it’s for stress relief , escapism or being able to do things they couldn’t in the real world which gives a character some real development as the story progresses . The age of the people through story also vary from adult to young child. Romances also seem slow built up but seem natural on how people connect.

Go Nagai creator of Mazinger Z , Violence Jack and Cutie Honey . Always surprises me whenever I find work I haven’t seen. this series where the protagonist Banji Suke who after a clerical screw up send him a wrong school uniform and has to dress as a girl to attend school . As Suke Ban is a rebellious boy who comes from a completely dysfunctional family where they constantly beat the shit out of each other constantly or goes down the perverted route creates a comedic tension.

When he attends the school the evil Principal witnesses a fight between him and a rebel gang of pantyhose girls(seriously that’s their name) sees his necklace given to him by his step mother and desires it for no apparent reason and sends every club after him to claim the necklace.

The story is quite simple . But there’s something you can get from the show . Things are taken up in straight value . He wears a sailor fuku outfit -there for he is now a female . Which makes the reader in on a joke that only you and the main character were in on. 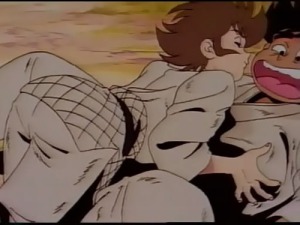 The animation is quite dated but still enjoyable with 80’s style music .

Is worth a watch sure but don’t think your going to get anything deep or meaning full because with a lot of his work . He wanted to address a few issues of the time but overall he just did because he thought it was fun.